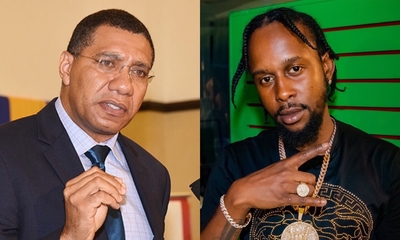 Popcaan added an interesting twist to the ongoing discussion of Jamaica Prime Minister Andrew Holness blaming dancehall for crimes in the country.

In an early morning tweet on Thursday (April 8), Popcaan told PM Holness to invest some of his own money into dancehall music. His statement comes after PM Holness says that he’s the first Jamaican Prime Minister to openly embraced and support dancehall music. Still, his recent statement triggered a backlash not only from entertainers but also from fans, a lot of whom have voted for him in past elections.

“Good morning mr prime minister, invest some of your money into dancehall music, Embrace it for a year!!!! you’ll never regret your investment,” Popcaan tweeted.

While it’s very unlikely that the Prime Minister will respond to Popcaan directly, it’s likely that he will further address the broader issue in the near future. The Unruly deejay’s tweet breathes new life into the ongoing debate sparked by the Holness over a week ago where he blamed dancehall lyrics for high crime rate. The vast majority of fans of the deejay disagree with Holness’s assessment, but some others don’t agree with politicians pumping money in the genre due to the fear that they will ultimately stifle creativity.

“Government not allowed to mix up in Art or Culture poppy,” one fan tweeted in response to Popcaan. “Our creativity is at risk if such should happen. Plus we no want nuh hand outs from Politicians remember.”