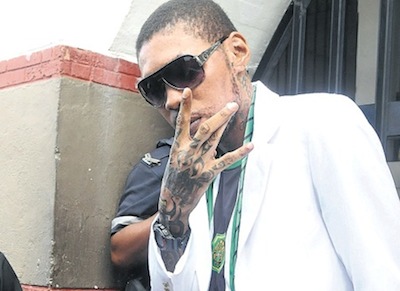 A story published on the front page of the Observer yesterday about Vybz Kartel being a police informant is having some ripple effects.

According to new reports, two journalists employed by the Observer have been getting death threats since the story went viral.

The Director of Public Prosecution and several other persons involved in the trial have also reported that they are getting death threats from thugs aligned to the self-proclaim Worl’Boss.

It was brought to my attention this morning by a member of my legal team that a number of persons including journalists have reported receiving threats from persons purportedly acting on my behalf.

During my sentencing hearing my Attorney Tom Tavares-Finson indicated to the court that I hold no ill-will to any of the persons involved in my trial neither the Police, Prosecutors, Executives from Digicel and certainly not any member of the Media who covered my trial in a manner which exposed the weaknesses in the Prosecution’s case for all the world to see.

I reiterate the position “I hold no ill-well [sic] to anyone who was involved in my trial” and I put my faith in the judicial system and the appeal process on which we have now embarked.

I appeal to any misguided individual or individuals who may think it appropriate to seek to threaten or intimidate anyone, to stop it.

Such action is not helping me or my fellow appellants and is playing into the hands of the Police and others who are seeking to discredit me and prejudice the fair hearing of my appeal.

In the meantime I thank my family, friends and fans who continue to support and have faith in me.