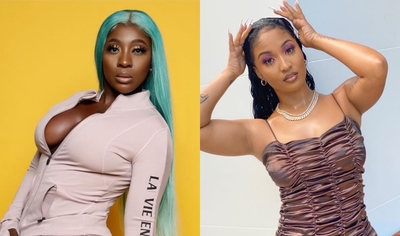 Spice and Shenseea have both unfollowed each other on Instagram fueling more rumors about a brewing beef.

Trouble seems to be brewing between Spice and Shenseea as the two women who were previously chummy have unfollowed each other on social media and fans are speculating that the two have had a tense relationship after since Spice’s religious advisor disclosed that he told Spice not to collaborate with Shenseea because she would outshine Spice and take her place in dancehall.

Shenseea and Spice have never collaborated even though the “Shengyeng Anthem” deejay has said that she was interested in doing collaborations but nobody wants to collaborate with her.

In December of 2020 while on a live video she responded to fans who asked why she hasn’t done many collaborations. “guys, it’s not that I don’t try to do collaborations eneuh, especially with Jamaican artists, it’s just dem nuh waan do none wid me, really and truly. My manager has reached out to a lot of females, dem nuh waan do nuh song wid mi suh weh me fi do?”