PM Andrew Holness Not Ruling Out Vybz Kartel Being Vax AmbassadorA recent study showed that anti-vaccination rhetoric and conspiracies were rife among the population, with the majority of people against mandatory COVID-19 vaccination. However, the Prime 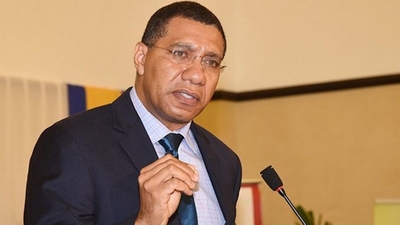 Prime Minister Andrew Holness says that Vybz Kartel may have a key role in the government’s continued efforts to vaccinate the majority of Jamaica’s population by 2022.

So far, just about seven percent (7%) of the island’s people are fully vaccinated. While the government has been trying to vaccinate persons, there has been a high number of people against taking the shot, which is said to help persons from either getting the virus or having minimal reactions.

A recent study showed that anti-vaccination rhetoric and conspiracies were rife among the population, with the majority of people against mandatory COVID-19 vaccination.

However, the Prime Minister believes that Vybz Kartel, who is one of the most influential entertainers on the island, might be able to assist in getting more persons on board.

“In a national emergency such as a pandemic, we in the Government of Jamaica would enlist the support of all well-thinking citizens in encouraging persons to take the vaccine,” Holness said.

The incarcerated Vybz Kartel, whose real name is Adidja Palmer, recently took his first dose of the AstraZeneca COVID-19 vaccine and is said to be doing well after taking the shot.

The proposal to use Kartel first came about after his Attorney, Isat Buchanan, noted that the artist wanted to take the vaccine, but it was not yet available for prisoners. He also suggested that the artist who had a deep connection with average Jamaicans through his music be used as a vaccine ambassador, something that Health Minister Chris Tufton wasn’t aversed to.

“There is no doubt that Vybz Kartel is an influencer, with many fans throughout the country. … If he can influence others to take it that would be good. I would be willing to work with the penal system to explore how it could be done,” Tufton said recently.

Reply cheap priligy
7:12 AM on September 22, 2021
Information On Amoxicillin

Reply zithromax mail singapore
6:58 AM on September 22, 2021
Amoxil And Sandoz And Appearance

Reply hoe can i buy priligy in usa
4:45 AM on September 22, 2021
Pharmaceutical Products Viagra