Jada Kingdom Gives Popcaan His Flowers On His 33rd Birthday 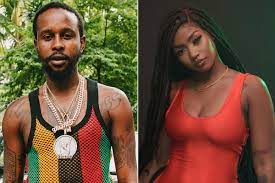 Jada Kingdom hands Popcaan his flowers on his 33rd birthday.

Popcaan, whose real name is Andre Hugh Sutherland, has worn many hats throughout his career, but Jada Kingdom has chosen to highlight his qualities as a motivator on his biggest of days. Popcaan has been hailed as the voice of unity over the past few years through his work with artists like Mavado, Beenie Man, and members of his own Unruly clan.

Though recent fallouts, such as the rumored beef with Unruly Cuz, have somewhat stained the image of the camp, Popcaan’s work with the likes of Dre. Island, Zamunda, Quada, and Bakersteez is proof of the deejay’s quest to develop the image and talents around him. It turns out that Jada Kingdom is also a benefactor of the Unruly boss’s talents.

Twinkle used Poppy’s birthday to reflect on how he aided her in overcoming anxiety and stage fright while performing on the first staging of Popcaan’s Unruly Fest in 2019. The event, which was held in the Eastern-most parish of Jamaica, also featured a host of Jamaican talents, both seasoned and new, as well as international superstars Drake and Tory Lanez.

“HAPPY EARTH STRONG TO DI UNRULY BOSS!” Jada wrote below a video of Popcaan assisting her during her performance of her hit tracks “Banana” and “Heavy!”

She continued, “I will never forget my first time on unruly fest (2019) when i really wanted to disappear caz anxiety & bipolar depression dida kill mi and YOU helped me finish my performance?…not even you knew what you were doing in that moment but i respect you for always supporting me from before i even started my career till now… naffy guh inna alla dat caz yu know di f_kin vibez! jus kno seh “Unruly Twinkle” luv yuh More life,blessings and prosperity mi G! #Unrulystate #OneEsyde.”