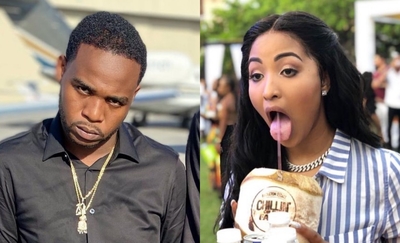 Are Shenseea and Teejay beefing? The two former Romeich signee unfollowed each other on Instagram and throwing a lot of shade.

Sources told us that the fued in the camp has been silently brewing for weeks and grew more intense after Teejay abruptly left Romeich Entertainment camp in June after almost 3 years with the team. The Mobay singjay subsequently signed with Solid Agency in a move that some of his fans dubbed “smart.” His fans had steadily been citing that his former manager Romeich Major was only interested in furthering Shenseea‘s career leaving all others to the wayside.

While the ‘Uptop Boss’ maintained that there was no bad blood between him and Romeich in an interview with Suncity Radio, fans speculate that this might not necessarily be the truth.

The story has now gotten more interesting for fans following the latest update in a tweet from the dancehall princess. Shenseea, who just three days ago announced that she has signed with 2020 manager of the year, Wassim ‘Sal’ Slaiby, and thus leaving Romeich Entertainment.

Fans speculate that there may be more drama than the group is letting on, as was hinted in Shenseea’s post on Thursday (July 15).

“Artiste vex over me because me deh a RomeichEnt when dem come ya come see me! Joke dis! How me fi invite you a my house and you wa try kick ME out,” she wrote