Skillibeng and Stefflon Don Got A Collaboration On The Way 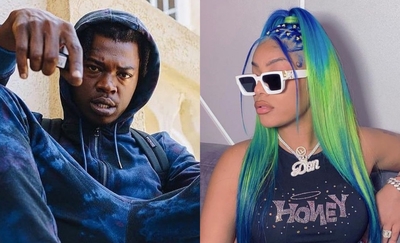 Skillibeng and Stefflon Don got a collaboration on the way.

The name Skillibeng has become synonymous with collaborations, and he continues his reach through his work with UK-based dancehall entertainer Stefflon Don. The UK rapper announced her arrival to the island when she strutted her stuff in a skimpy bikini for her IG followers. It turns out her trip back to the reggae/dancehall capital of the world was not only for recreation, even though she used the time to conquer her fears of spiders.

The “Hurtin” singer was also down for business, and it became pretty evident when Skillibeng shared a short video of them posing for a picture together. The image was shared without a caption, which left fans assuming a collab was in the works. Those rumors were confirmed later in the day when Skillibeng shared a video of a handful of skimpily clad melanin bodies gyrating on a boat to the lyrics from the unreleased track.

Neither Skilli nor Stefflon Don has shared any concrete details on the collab. However, it’s clear the song was crafted with the ladies in mind. The unreleased track has now become the second collab for Stefflon Don in recent times after she teamed up with Ding Dong for a remix of his song “Man A Star.”