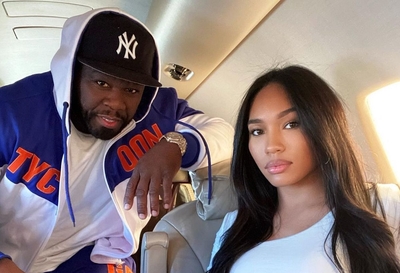 50 Cent’s girlfriend Cuban Link reacted to Vivica Fox calling him the “love of her life.”

It’s easy to conclude that 50 Cent is known for a lot of things. His music career, G-Unit brand, Vitamin Water, movie and tv show productions, and a knack for trolling have all secured 50 Cent’s legacy as being one of the most sought-after persons in the business. Hidden under his cutthroat trolling tendencies and savvy business skills is a kind and sincere lover. That is according to actress Vivica A. Fox, who still regards the rapper turn TV mogul as the love of her life nearly 20 years after the couple broke up.

In a recent interview with Vlad TV, Vivica A. Fox confessed that she still has the hots for 50 Cent, who is now dating aspiring corporate lawyer Cuban Link.

The 56-year-old actress recalled how he and the “P.I.M.P.” rapper met.

“We met after he said the thing at the Soul Train Music Awards. ‘And I want to thank Vivica Fox for wearing that dress. I was shocked… I was just kinda like, wow. And then after that, his people got in touch with my people and next thing I know, we were on the phone and my birthday was coming up and he’s such a gentleman,” she said. “He’s very generous. I know him as Curtis, always will, and the 50 Cent, those are his performing things and who he is as a man. So, I met Curtis.”

Reply gunma.top
8:52 PM on November 11, 2021
Don’t be afraid to spread your thoughts. You have just made my year a great one! You are clearly an influence in this field so I'm sure many of these concepts probably come easily to someone like yourself however, I am still not understanding some things you’ve written here. What a highly descriptive and well written post. Any more feedback? It would be greatly appreciated.

Reply massage.blue
8:45 PM on November 11, 2021
As I apply more and more of these insights to my daily life I can see how your education has transformed you into a top expert in this industry. I talked about these very points to my professor today and she couldn’t argue any of these points. After seeing this I know I will not be the same. Be cool if you were close to me so we could hang. I don’t know why but this site takes almost a minute to fully load on my friends laptop. Reading your content is way better than snuggles.

Reply ophunter.net
8:38 PM on November 11, 2021
I’m impressed, I must say. I’m here for the first time. Superb! I simply must tell you that I really love your blogs page. My boyfriend enjoys your blogs.

Reply Equallups
5:02 AM on November 10, 2021
buy prednisone online without prescription