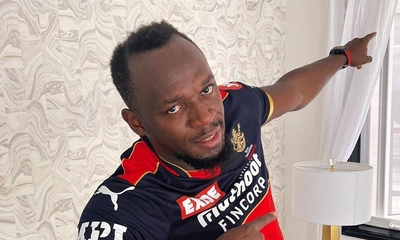 Usain Bolt is hitting back at critics who he insinuates are ungrateful for his many contributions to Jamaica while only having a problem with him because he has entered the dancehall forum.

The video comes a day after disclosures by the police that a pending case against Usain Bolt for breaches of the Disaster Risk Management Act for his surprise birthday party last year was dropped. Many persons reacted with anger and disappointment that the sprint legend seemed to be getting some preferential treatment while his counterparts, like Beenie Man, is facing the consequences for a similar breach.

In a video shared on his Instagram account, Bolt is seen vibing to a new song voiced by veteran dancehall deejay Baby Cham who criticizes the government’s reaction to the Covid-19 virus. The lyrics of the song says many are tired of the measures against the virus as the pandemic brings undue hardship, which Baby Cham addresses. The song is titled, “Lock Down”.

“Can’t chat to mi friend only phone and video link / Can’t go a Helshire go eat or have a drink / Can’t get fi hustle so we revenue shrink / You want the people dem a get pushed to the brink / So we drink, nothin’ else nuh deh fi do but go crazy / Leaders who need fi listen and nuh taze we / Don’t forget ah vote fi you, do, it amaze mi / Wonder if a care if unu care or if a unu lazy / Months and months dem ah say fi stay home / Can’t go a barber, fi weeks mi hair nuh comb,” Cham deejays.

The track star is the latest among sportsmen pursuing a career in music which includes the links of DJ Bravo, Kyle Butler, Marlon Samuels, Chris Gayle, and others.

Bolt, however, has taken issue with those who criticize him. His caption accompanying the song from Baby Cham asked why people had a problem with him.