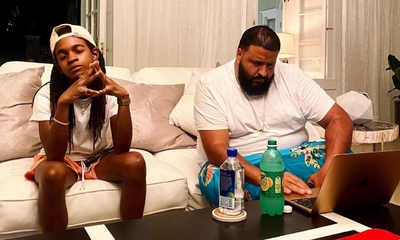 DJ Khaled has assembled a star-studded dancehall lineup for his new album with Koffee, Bounty Killer, Capleton, Buju Banton, Barrington Levy, and other artists. The album called Khaled Khaled” is almost ready at 98% done, according to the legendary music producer who is in Jamaica.

DJ Khaled has always been a fan of and includes reggae and dancehall acts in his projects, but this might be the first time that he is featuring so many artists on his album. What’s even more unique about the new project is that, unlike other overseas producers/ artists who worked with Jamaican acts, Khaled flew down to Jamaica. He also brought his crew to record and shoot music videos in Jamaica, so money from the album production is flowing directly into the island.

The new album is Khaled’s 12th studio album, and among those who are going to be featured are Migos and H.E.R. They are also in Jamaica for a week as they wrap up filming. Several other A-listers are said to be on the album, which includes Post Malone and Drake, who are on the first two tracks of the album. The tracks -“Popstar” and “Greece” have already been released. The songs mark the reunion of Drake and DJ Khaled, who last worked together in 2010.

Both songs debuted at No. 8 and No. 3 on the Billboard Hot 100, respectively, marking the Canadian rapper’s 39th and 40th Hot 100 top ten song entries- achieving a milestone as it broke Madonna’s 18-year record.

In the U.S, “Greece was certified Platinum by the Recording Industry Association of America for selling one million-plus copies while “Popstar” was certified 2x platinum-selling more than two (2) million copies.

Reply WbzwAdall
9:21 PM on October 7, 2022
lasix medicine doses of furosemide what is furosemide 40 mg for

Reply Jxcrkarbiobia
12:24 AM on August 31, 2022
analytical essay outline introduce yourself essay a hook for an essay

Where Can I Buy Omifin