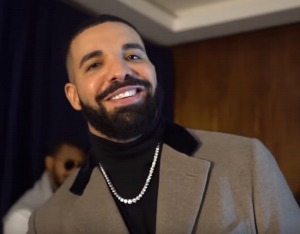 There is a reason “Life is Good” for Drake at the moment.

Aside from releasing collaborations with Future and potentially recording new music with Sosa Geek, Drake looks to have a new lady in his life. The Six God spent an evening last week at Nike’s 2020 Olympic Collection fashion show in New York City and after doing dinner with Rosalia and Travis Scott, he ventured to the Fleur Room later that night. But he was not alone at the swanky rooftop bar.

Those present spotted Drake sharing some intimate moments with a Dutch supermodel named Imaan Hammam. The beauty has graced the covers of Vogue several times and has appeared on the runway for top designers including Versace, Dolce & Gabbana, Prada, Stella McCartney, and Marc Jacobs, amongst other high-end brands.