The controversy surrounding Jay-Zs new partnership with the NFL, explained 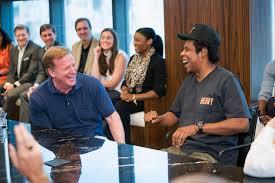 Hip-hop’s first billionaire will help with the NFL’s social justice efforts. Critics are angry that the deal excludes Colin Kaepernick.

It was supposed to be good news, the joining of a beloved but beleaguered sports corporation and a heralded rapper in the name of entertainment and social justice.

Instead, it added fuel to an ongoing controversy.

On August 13, the NFL announced that it was entering a partnership with Roc Nation, the entertainment company founded and led by rapper and mogul Jay-Z. The deal, which has reportedly been in the works for several months, means that Roc Nation will now help “advise on selecting artists for major NFL performances like the Super Bowl.”

While the deal effectively gives Jay-Z a major role in developing one of the most-watched concerts in the country, it also includes a social justice partnership between the rapper and the NFL. Roc Nation, the NFL adds, will play an important role in the NFL’s recently launched “Inspire Change” initiative, a collaboration between the NFL and the Players Coalition, a group of NFL players seeking to advance social and racial justice. The initiative focuses on three causes in particular: “education and economic advancement; police and community relations; and criminal justice reform.”

Both parties say the deal is an important step forward in indicating the NFL’s strong commitment to helping marginalized communities. “With its global reach, the National Football League has the platform and opportunity to inspire change across the country,” Jay-Z said in a statement this week. “This partnership is an opportunity to strengthen the fabric of communities across America.”

In an alternate universe where the NFL had long been seen as dedicated to social justice causes, this partnership might have attracted considerable praise, or at least open support. But this week’s announcement, which was followed a day later by a press conference with NFL Commissioner Roger Goodell and Jay-Z, has instead faced criticism for giving the league a way around the years-long controversy it has been embroiled in following its treatment of Colin Kaepernick. The former San Francisco 49ers quarterback has not played in the NFL since becoming a free agent in 2017; the year before, he sparked a league-wide protest by kneeling during the national anthem to call attention to racial injustice and police brutality.

Kaepernick has argued that he was effectively blackballed and exiled from the league for his protest and filed a formal grievance against the league in October 2017, saying that NFL owners had colluded to keep him off the field. That grievance was settled this past February for an undisclosed sum (though Kaepernick and Carolina Panthers safety Eric Reid, a former teammate and partner in the grievance, reportedly settled for less than $10 million).

The NFL has faced criticism for owners’ refusal to hire Kaepernick as well as its attempt to end the player kneeling protest that continued without him. In May 2018, the league announced that it would implement a policy barring players from kneeling on the field during the anthem, requiring them to either stand on the field or remain in the locker room, or potentially face a fine. (It later walked that policy back after facing fierce criticism.)

And the fact that several NFL owners are prominent donors and supporters of President Donald Trump — who has repeatedly attacked Kaepernick and other kneeling NFL players, framing their protest against injustice as unpatriotic — has led to arguments that the league cares more about pleasing the president and his supporters than the predominantly black group of players who sought to highlight injustice.

All of these issues predate the new NFL/Roc Nation partnership (which was perhaps not coincidentally discussed in detail at a press conference held on the third anniversary of Kaepernick’s first protest). But these issues have still led to backlash against and criticism of the new deal, with critics focusing most of their ire on Jay-Z.

They argue that the rapper, who has long funded impactful social justice causes and has used his platform to praise Kaepernick’s protest, is disregarding the fact that the NFL has still not signed Kaepernick to a team. And in Jay-Z becoming the new face of the NFL’s social change initiative, critics claim he is also disingenuously capitalizing on Kaepernick’s protest, using the NFL’s desire to deflect criticism to make more money for himself.