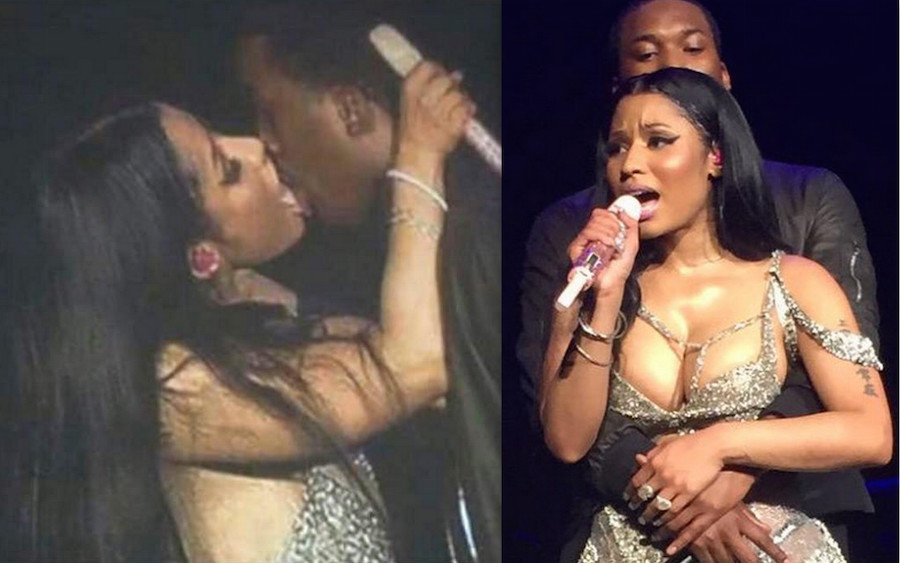 Nicki Minaj kick start the North American leg of her PinkPrint tour on Friday in Dalla, Texas with a bang. Aside from her licking her boyfriend Meek Mill’s face on stage, the scantily clad rap diva is pulling large crowds to her shows.

The Young Money rap diva wrapped up the final European shows on her hugely successful PinkPrint tour. For the US and Canada leg of the tour she brought some familiar faces with her like Dej Loaf, Rae Sremmurd, Tinashe and her new man Meek Mill.

Almost 20,000 fans came out to the Gexa Energy Pavilion in Texas for her first show.

Everyone should watch this video except Safaree Samuels.

While performing “All Eyes On You” Nicki told Meek that she doesn’t want to kiss him, she just want to lick him. He told the audience that he is the luckiest guy.

Nicki Minaj will be moving her tour to Miami New Jersey and New York this week.

Sources told Urban Islandz that the couple will be dropping their new music video for “All Eyes On You” this week.

“There is a definite rush to get the video out before the North American leg of the PinkPrint tour climax,” our source close to the Trinidadian rapper told us. “The video is dope and the song is dope so naturally you can expect a summer blockbuster from this project.”

Nicki Minaj recently shared some behind the scenes photos from that video shoot showing herself and Meek Mill cuddling up and another shot of her in a pool wearing a denim swimwear.

Reply Blulvax
12:21 AM on September 18, 2021
https://buylasixshop.com/ - what foods to avoid when taking furosemide

Reply Hewgroowl
1:13 AM on September 16, 2021
http://buyplaquenilcv.com/ - where can i buy plaquenil without a prescription

Reply what does plaquenil do to your body
10:53 AM on September 15, 2021
Zithromax Cystic Fibrosis

Reply oblicle
2:17 AM on September 5, 2021
where to buy stromectol without prescription