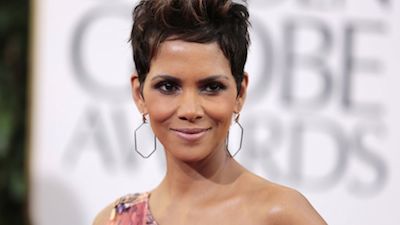 What's in a bra? Femininity, sexiness and self-empowerment, says Halle Berry, who is launching a lingerie line she says will do it all.

The Oscar-winning actress is reviving Scandale, a lingerie label born in France in 1932.

"We've taken this brand and revamped it," Berry said in an interview Thursday. "But we've kept all the qualities of the Parisian sort of style intact."

The collection of 10 bras and panties will be sold by Target, and while "rich with history and heritage," will boast "a very good price," said Berry, who, beneath her lacy dress displayed a black Illusion demi bra (less than $20).

Berry is an owner of the Scandale Paris line and said she plays a hands-on role in design, declaring, "I think I have a pulse on what American women want."

She agreed that, for guys, the choice of undergarments is largely a question of boxers or briefs. "But most women know that what you put under your clothes is the first step in making yourself feel good about yourself."

Women buy lingerie mainly for themselves, she went on, quickly adding, "When they find something they feel good in, and that makes them feel sexy and feminine and empowered, their partners also reap the benefits."

Berry, who won a Best Actress Academy Award for the 2001 drama "Monster's Ball," came to television last summer in the CBS sci-fi series "Extant." For this film veteran, series TV, with its faster-than-film pace and longer-than-film hours, was "a rude awakening," she confessed. But now she's braced to resume production for next season in February.

Despite the excitement her entry into series TV ignited, reviews for "Extant" were mixed and ratings less than spectacular.

"That was disappointing, you might say," she admitted, "but at least we got picked up. I think we learned a lot from the first season."

She noted that many series take time to break through into long-running hits.

"I hope that will be our case," she said.