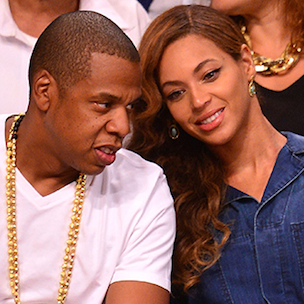 Melina Matsoukas, who directed Jay Z and Beyonce's Run trailer, says Jay Z wasn't all in on the project.

“Beyoncé was definitely really excited; Jay was a bit skeptical," she says in an interview with Elle. "But we were able to kind of force him into it. He’s always interested in doing something different so I think that part was exciting to him. I think he was hesitant about ‘Oh, now I have to be an actor.’ I was like, ‘If it works, great. If not, then we’ll cut around it and make it a more typical video.'"

The director also says Jay Z made a request for an acclaimed actor to appear in the trailer.

"Jay put in a call for Sean Penn," Matsoukas says. “It was the end of us shooting the first day. One of Jay’s creatives came up to me and she’s like, ‘OK, we need to call Sean Penn now. He’s coming tomorrow.’ And I’m like, ‘What? OK.’ So I’m driving back through the desert, and my phone’s not working, and it didn’t work that night, and I wake up the next morning to a text from Sean Penn."

Fans have launched a petition to make this trailer a full-length film.