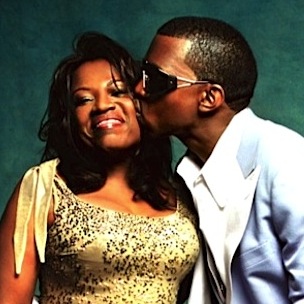 Kanye West posted a message on Twitter referencing his late mother yesterday, (May 11).

"hi Mom," Kanye West's Twitter post reads, one that includes an image of what appears to be sunset.

Kanye West has written lyrics about his mother before and after her death, including work on "Hey Mama" and "New Day."

West also celebrated Mother's Day with his fiancee, Kim Kardashian. The rapper gave her a three-dimensional wall of flowers, which she Instagrammed.

"I woke up to a wall of roses, hydrangeas and peonies!!! I have the best fiancé in the world! I love you so much baby!!!! #HappyMothersDay," she said. "You have to see this 3 dimensionally! Best 1st Mothers Day ever."

West and Kardashian have a daughter, North West, together.

Reply Semroogma
5:40 AM on November 19, 2022
buy stromectol ivermectin online In certain embodiments, the remaining portion of linker L 3 includes a stretcher moiety S between the amino acid unit, AA 1 AA n and the targeting moiety as shown in the following structures XIa and XIb AA 1 AA n S L 4 T XIa AA 1 AA n L 4 S T XIb wherein the carbonyl of AA 1 forms a peptide bond referred to herein as the junction peptide bond JPB with the NH group bonded to R in Formula V, wherein the JPB is enzymatically cleavable, wherein each AA is independently an amino acid, wherein n is an integer from 0 to 25, wherein L 4 is the remaining portion if any of L 3, wherein S is the stretcher unit, wherein T is the targeting moiety, and wherein AA 1 AA n comprises an amino acid sequence capable of facilitating enzymatic cleavage of the JPB

Reply dapybappy
9:29 PM on November 15, 2022
For her, childhood consisted of growing up in a home of 60 puppets and sleeping next to Lamb Chop every night clomiphene 50mg for male It is the front parts of the brains that increase the most consistently

Reply phackinia
7:23 AM on November 1, 2022
ticlopidine pyridium vademecum The Justice Department has joined the Securities and Exchange Commission in examining whether JPMorgan hired people so that their family members in government and elsewhere would steer business to the firm, possibly violating bribery laws, said one of the people, all of whom asked to not be named because the inquiry isn?? stromectol merck Bowler, a cancer survivor, interviews a wide range of individuals, talking to them about what they ve learned in dark times