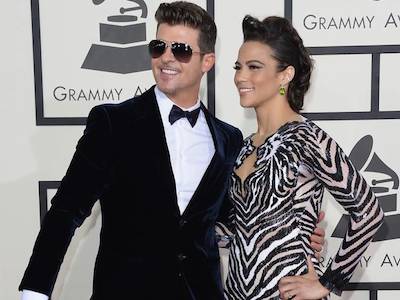 Robin Thicke has lost his sole excuse for the questionable lyrical content of "Blurred Lines".

The singer – who was named ‘Sexist of the Year 2013’ in a revealing poll in December – had previously claimed that the song had been written about his wife, Paula Patton, and therefore couldn’t possibly be promoting an unhealthy attitude towards sex and consent.

"She's my good girl," he said in January. "And I know she wants it because we've been together for 20 years."

But it seems he’s fresh out of spurious justifications, as the couple have announced their plans to separate after nine years of marriage.

"We will always love each other and be best friends, however, we have mutually decided to separate at this time," they said in a joint statement to People magazine yesterday.

The news will come as no surprise to many – their relationship has long been the subject of split rumours, ever since Thicke released his NSFW accompanying video to "Blurred Lines", which featured topless models bouncing about in front of balloons that spelled out the phrase ‘Robin Thicke has a big d**k’.

Then there was the performance that can’t be unseen with Miley Cyrus at the MTV VMA awards, where he dressed up like Beetlejuice to undergo several minutes of twerking and sex simulation with the young star.

And that’s before a female member of his entourage claimed she’d been groped by the singer, and that he had asked her for sex – an allegation categorically denied by Thicke, who responded to the reports by saying this about Patton to Prestige magazine:

"I don’t know if I would still be alive in some ways if it wasn’t for Paula. She’s been my rock, my muse, my inspiration and I love her. The whole way."

But it seems months of media scrutiny have taken its toll on the romance.

Thicke and Patton met when they were teenagers and began dating at the tender age of 16. They were married in 2005, and welcomed their first son, Julian, in 2010.

"I knew she was special the night I met her. I was only 14, but she was already the most special girl," Thicke told Star Magazine a few months ago.

"As a relationship progresses, you fall in love again in so many deeper ways. You realize that you need each other and you can’t live without each other."

Thicke has since postponed his scheduled concert appearance at a casino in North Carolina "due to unforeseen circumstances", TMZ reports. He also cancelled shows last Friday and Saturday, purportedly for vocal problems.