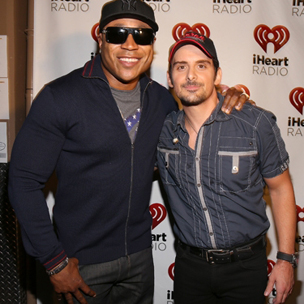 LL Cool J and Brad Paisley claim they understand the criticism, but urge listeners to take a closer look at the song with lyrics like, "If you don't judge my gold chains / I'll forget the iron chains."

for its themes of racial harmony through inadvertent social miscues. The song appears on Brad's Wheelhouse album, though the duo also has a collaboration on LL's upcoming album,Authentic.

LL Cool J, now a star on "CSI," explained: "[Dr.] Martin Luther King, [Jr.] says that darkness cannot drive out darkness, only light can. Hate can't drive out hate, only love can. So what we're talking about is compassion."

One of the founding stars of Def Jam Records' 1980s roster said that he accepts the criticism coming from "Accidental Racist," claiming, "Some people take exception to some of the lyrics [and] I respect that. I'm sensitive to that."

"Let's not be victims of things that happened so long ago," Brad Paisley Paisley added. "In the end, I felt like what we had on tape was something that people needed to hear." Cool J chimed in, "At the same time, let's respect it. But then after we respect it, let's also open our hearts up so we can move forward."